admin 3 недели ago It is interesting, News, Uncategorized, Video Leave a comment 585 Views

It may be tough to age as a well-known Hollywood celebrity. With constant scrutiny from a plethora of fans, it’s no surprise that many actors resort to cosmetic surgery to maintain their youthful appearance.

However, not every celebrity believes that aging is a bad thing. Andie MacDowell never tried to hide her signs of aging, preferring to flaunt her maturity. The «St. Elmo’s Fire» star recalled a story from when she was 40. Many reporters were intrigued by her age at the time, and they all wanted to know how she felt about growing older. When a journalist inquired about her feelings about losing her appearance, she stated unequivocally that she does not believe she is losing her appeal. It simply appears to her to be a different form of beauty.

As she grew older, MacDowell advocated for the preservation of natural beauty. She never chastised someone for getting cosmetic surgery, but she said she would never have it done on herself. She thinks natural aging is a great stage. The actress admits to trying Botox once but disliking it and never doing it again. She also disclosed that she had previously visited a plastic surgeon and left after a brief session, believing she would never return.

Rather than having plastic surgery, MacDowell seeks to care for her skin with facials and self-care. The actress stated that she has accepted herself and who she has evolved into over the years.

Throughout her career, MacDowell has served as a spokesperson for the cosmetics company L’Oréal. Working for a well-known corporation, she noted, has been good since they have always been supportive of her and have enabled her to accept aging. MacDowell has had to accept the fact that she is getting older throughout the years, but she has also recognized that aging isn’t as devastating as many people believe. The actress learned to be confident in her age.

MacDowell recently made a major statement by refusing to colour her hair as she grew older. She was forthright about her decision, claiming that it was mostly inspired by her children. MacDowell reported that she started turning grey at the start of the lockdown. She visited her children frequently during the quarantine because they lived nearby, and as her hair began to grey, her children were always there for her.

After receiving supportive comments from her children, MacDowell decided to keep her natural hair color. Her management first pushed her to color her hair rather than follow the natural approach. She was staunchly opposed. MacDowell told them that the time had come to flaunt her greying hair. The actress explained that she had always admired the distinct appearance of hair that hadn’t gone entirely grey, and that if she waited any longer, she would miss her chance.

She soon received an offer for a new project and had to make a decision. MacDowell chose to be strong, and she hasn’t looked back since. She appears to be at comfortable with herself and her new all-natural hairdo. Obviously, there was always some fear about how people might react to the change. MacDowell stated that she considered having a selection of wigs on ready in case she enraged anyone.

Fortunately, she discovered that she didn’t have to please anyone except herself once she was out in the world. She was having fun with her new hair and the process of aging. She was not about to hide her age from anyone.

MacDowell explained why she chose to keep her natural hair color. She added that she watched other average women making the move on Instagram and appreciated their bravery. She also remarked that her hair and features no longer appeared to be in sync. Her facial creases were obvious. Her youth contrasted with the lines on her cheeks when she colored her hair.

MacDowell felt fantastic after electing to preserve her natural hair color. She had the impression that she could be herself without feeling self-conscious. She thought she was beautiful simply for being herself.

She realized that by going out in public with her natural hair, she could speak for all the women who feel the need to hide who they are. She began using her platforms to inspire others, similar to the other powerful women who had influenced her. In an industry where aging might indicate the end of your profession, especially for women, MacDowell has always been open about her age. Despite the danger, she realized she didn’t want to conceal her identity.

Although MacDowell received a lot of support from her fans, not everyone thought her natural hair color was a good idea. Some fans expressed their support for the actress by recommending that she tint her hair.

MacDowell recently announced that her son and his wife are expecting their first child. She has three children and is expecting her first grandchild. In a post, she revealed her pregnancy and expressed her joy at becoming a grandma. MacDowell has always prioritized her family over her professional career. She likes spending time with her three children, which she stated in an Instagram post.

She captioned the photo, saying she loves her children and that they have taught her so much over the years. She went on to remark that she couldn’t wait to see what her grandson has in store for her.

The message included two photos of MacDowell’s child and wife, both of whom appeared ecstatic about the forthcoming delivery. The new mother wore two outfits to show off her baby tummy, and the couple was spotted laughing and embracing. 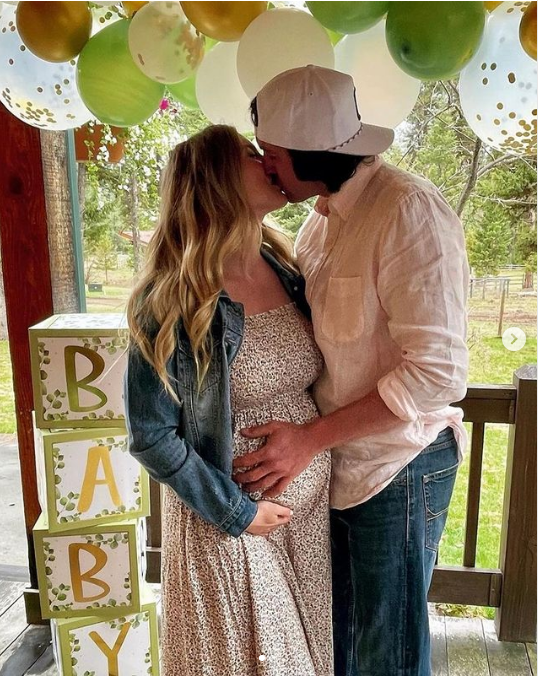 Previous How Bruce Willis, 67, lives after announcing his retirement from the film industry due to sickness
Next Man takes pictures of a homeless man having a birthday celebration for his dogs and ends up altering his life.